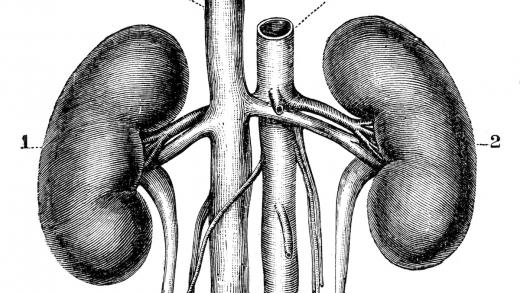 NEW YORK, NY (March 6, 2017)—Researchers have uncovered new genetic clues to understanding IgA nephropathy(link is external and opens in a new window) (IgAN), or Berger’s disease, an autoimmune kidney disease and a common cause of kidney failure. The findings are relevant to IgAN and other diseases with similar underlying molecular defects, such as inflammatory bowel disease and certain types of blood disease and cancer.

“Very little is known about the causes of IgAN, genetic or otherwise, so our discovery represents an important step toward developing better therapies for this disease,” said lead author Krzysztof Kiryluk, MD, the Herbert Irving Assistant Professor of Medicine at Columbia University Irving Medical Center (CUIMC).

The study(link is external and opens in a new window), conducted by researchers at CUIMC and the University of Alabama at Birmingham (UAB) School of Medicine, was published last month in PLOS Genetics.

IgAN occurs when an antibody called immunoglobulin A (IgA) collects in the kidneys, causing inflammation of the glomeruli, the kidneys’ filtering structures. Over time, the inflammation can hinder the kidneys’ ability to filter waste from the blood. About half of patients with IgAN have progressive disease and eventually develop kidney failure. There is no cure for IgAN, but medications, along with blood pressure control, can slow disease progression.

To identify genes linked to O-glycosylation problems in IgAN, Dr. Kiryluk and colleagues performed genomewide association study (GWAS) of 2,633 people of European and East Asian ancestry, populations with high rates of the disease. All of the participants were analyzed for blood levels of galactose-deficient IgA1 (Gd-IgA1), a marker for IgAN, using a new high-throughput blood test developed by lead investigator of the study Jan Novak, PhD, associate professor of microbiology at UAB. A GWAS of this kind had never been done before, because there was no way to efficiently measure the biomarker in such a large volume of patients.

The researchers found that variations in two genes, C1GALT1 and C1GALT1C1, were significantly more common in people with high levels of the Gd-IgA1 marker. “The genes are found on different chromosomes, but they make proteins that interact to form an enzyme critical for the proper glycosylation of IgA molecules,” said Dr. Kiryluk.

To confirm that C1GALT1 and C1GALT1C1 are involved in O-glycosylation, the researchers knocked down the two genes in cells in from IgAN patients and controls. Knocking down the genes increased production of the Gd-IgA1 marker in cells from both groups.

Variations in both genes, combined, accounted for about 7 percent of the overall variability in blood levels of Gd-IgA1 in the study population. “Since approximately 50 percent of variability in Gd-IgA1 levels is due to genetic factors, this means that about 43 percent of the genetic variability is still unexplained,” said Dr. Kiryluk. “We started with a relatively small study population, so explaining 7 percent of variability between individuals with the disease was a good start. As we analyze more patients, we expect that we will find more genetic variants and can begin to piece together how these variants interact with environmental factors to cause disease.” A GWAS of some 10,000 patients is now underway.

The authors have declared no conflicts of interest

Columbia University Irving Medical Center provides international leadership in basic, preclinical, and clinical research; medical and health sciences education; and patient care. The medical center trains future leaders and includes the dedicated work of many physicians, scientists, public health professionals, dentists, and nurses at the College of Physicians and Surgeons, the Mailman School of Public Health, the College of Dental Medicine, the School of Nursing, the biomedical departments of the Graduate School of Arts and Sciences, and allied research centers and institutions. Columbia University Irving Medical Center is home to the largest medical research enterprise in New York City and State and one of the largest faculty medical practices in the Northeast. Columbia University Irving Medical Center shares a campus with its hospital partner, NewYork-Presbyterian. For more information, visit cuimc.columbia.edu or columbiadoctors.org.

How to Safely Buy Essays Online

Buy essay online users inform of an assortment of reasons why they opt to buy essays on the internet, which include issues with time management,

A electronic deal place is an ideal approach to improve the entire deal process. The technology allows users to set permissions for each user and

What Are Financial Services?

The term “financial services” refers to a broad group of economic companies provided by the finance sector. These companies incorporate banks, credit-card firms, and credit

Tips on how to Increase Response Rates in Internet Surveys

One issue associated with larger response costs in World wide web surveys is mostly a personalized connection with participants. Several researchers include found that an

PrevPreviousMisleading Biopsies May Cause Viable, Donated Kidneys to Be Discarded
NextDiGeorge Syndrome Kidney Problems May Be Caused By Missing GeneNext